As the year that was 2016 draws to a close, we embrace and celebrate the dawn of a new era for Red Hat in Ireland with the opening of our brand new offices in my home city of Waterford on Monday, 12 December 2016.

This is an immensely proud moment for the entire Red Hat team in Waterford, especially so for those involved in the FeedHenry acquisition from October 2014 which has lead us to this wonderful occasion.

It is also fitting that the new offices are the first to feature the trademark We Are Red Hat internal branding in the Irish language, which translates as “Is Sinne Red Hat”. 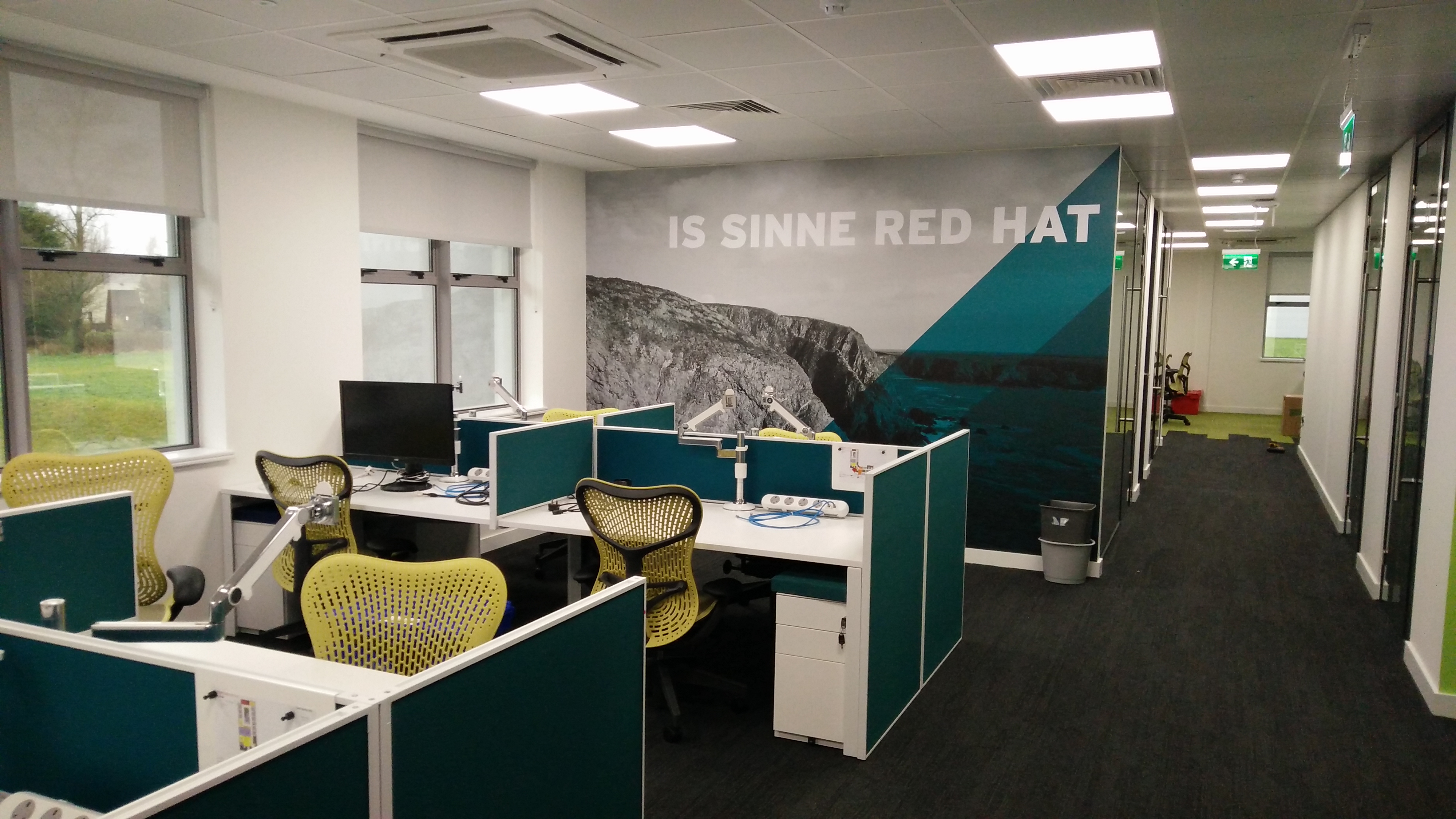 So to the management, staff, families and friends of the growing Red Hat community in Waterford, take a bow and enjoy the celebration and delights that this day will bring.

It is everything that we have worked for and is no more than our wonderful city deserves.

If you’re around the Waterford area on Wednesday, 14 December 2011, why not come along to the annual Food & Wine Tasting Evening at the Grand Hotel and sample a wide variety of beers, wine and local food – all for just €8.

This is a fundraiser in aid of two local schools (Gaelscoil Philib Barún and Holy Cross National School) and is sponsored by Hickson’s Centra, Tramore.

Hope to see you there.

Waterford Institute of Technology’s telecommunications research group, TSSG, recently commissioned a brand new, water-cooled data centre at its Carriganore campus. Having seen it for myself in recent weeks, I can confirm that it is utterly impressive and fully deserves all the high praise that it received in this recent article by Silicon Republic.

Some friends of mine are part of a group that are organising a formal celebration of the history and origin of Ireland’s national flag – more commonly known as the Tricolor – in the city where it was first unveiled – Waterford.

Jonathan Brazil has also written an excellent piece that introduces the planned celebrations far more eloquently than I ever could, so feel free to read his post too.

For more information check out http://www.1848tricolour.com and join in the festivities.

I’m delighted to report that a number of our colleagues here at the TSSG (Robert Mullins, Kieran Ryan and Mark Williamson) have just won first prize at the Ericsson Application Awards in Stockholm. The winning application, Caller Profiler, allows a variety of information including photo, location and professional profile (e.g LinkedIn) about the initiator of a phone call to be presented to the call recipient. A demonstration video presented by Robert Mullins is also available:

Well done on a fantastic job!

May 2010 has been a very busy month for FeedHenry and we have enjoyed lots of very positive press coverage throughout the month. Our pre-launch event in the Science Gallery, Dublin was particularly enjoyable, with an excellent turnout and lots of great questions and feedback on the night.

A number of our recent press releases were covered in a variety of online publications:

Some of the articles are obviously duplicates of the main press releases but the breadth of coverage is still very welcome.

FeedHenry is the leading innovator in pay-as-you-go cloud solutions for building and deploying cross-platform business and telecoms apps that will run natively on all smartphones, social media sites and browser start-pages from a single code base. We specialise in the development of sophisticated business and telecoms apps, that need to operate across mobile and social media channels, and which require business logic and storage in the cloud, secure integration with existing IT and telecoms systems and delivered to our customers as a complete end-to-end solution with full app lifecycle management and analytics.

FeedHenry features favourably in this article with Patrick Lenehan, CTO of Independent Digital, Ireland. By the end of March 2010, we will have produced a total of 16 smart phone applications for their regional and national newspapers.

FeedHenry, one of the startup companies from Waterford Institute of Technology where I work, received some positive press today in relation to the recent launch of eircom’s new Personal Services Portal (PSP). The new Web 2.0 portal, called “my eircom“, is powered by FeedHenry and allows users to completely personalise their experience of the eircom website, allowing them to share the wide range of applications and services on offer to other web and social networking platforms as iGoogle, Facebook and many others.

Mount Sion Silver Band is the name of a brass-instrument band that I was fortunate enough to be a member of for a sizeable portion of my schooling life (11 years in total). The band was part of Mount Sion C.B.S. in Waterford City and was formed in 1967 by a number of retired Christian Brothers, with the support of the school Past Pupils Union.

During its lifetime, the band won several regional and national titles, made a number of television appearances (most notably, the Late Late Toy Show in 1986) and represented Ireland at the World Youth Band Championships in 1985. A number of former members have also gone on to become professional musicians, playing with the likes of Van Morrison, Neil Sedaka, Pavarotti and U2 to name but a few.

Sadly, the is sadly no longer in existence today but myself and a few other former members are organising a reunion and would like to invite all former members, family and friend of the band to attend. A dedicated website for the band has also been created at http://www.mountsionsilverband.org where full details of the reunion are available, along with lots of other information about the life and times of the band.

As a researcher with the TSSG (the telecommunications research division of Waterford Institute of Technology), you learn very quickly that funding is everything. Without it, the place where I work each day could not, and would not exist and I would almost certainly be out of a job.

Obtaining this funding is incredibly difficult and requires an enormous amount of dedication, commitment, time and energy on the part of the teams of people who apply for it, and I stress the word team here because it is most certainly a team effort.

To this end, and to the credit of everyone at the TSSG, the Centre for Converged Communications Services (3CS) in the TSSG recently secured over â‚¬1.7m of funding in a single funding round. This is an incredible achievement in these challenging economic times, and an enormous amount of credit goes to everyone who contributed to this effort.