I recently came into possession of a rather curious looking spool of tape when going through some old things belonging to my Dad. This surprise discovery (which, amazingly, he never thought to mention when he was alive) was initially met with a mixture of curiosity and excitement, but then tinged with sadness as I remembered he is no longer around to ask about its origins or contents.

Of course the curiosity soon got the better of me and I felt I owed it to him to find out what was on it anyway, considering he had clearly safeguarded it for the better part of 50 years. I therefore set about finding a way to have it converted to some form of modern digital media.

I began by contacting a friend who had recently converted some vintage video reels of the same shape and size, and while he was able to confirm that I was in possession of a Reel-to-Reel Audio tape, he did not himself possess a suitable playing device and neither did any of his hobbyist friends. Fortunately, The Force is strong in this one and so we kept trying.

I then decided to try my luck on the I Am Waterford Facebook page (home to some 20,000 Waterford natives) and was greeted with a delightful array of helpful suggestions, a sizeable majority of which were directing me towards one person, Gary Burns (Audio Visual Technical Officer at Waterford Institute of Technology), who later chimed in himself and offered to do the conversion for me.

As we both live in the same town, I was able to hand over the reel the following day, and within a few days of that I found myself downloading an audio file with the contents of the reel in all its crackly glory – all 35 minutes of it!

Naturally, the anticipation at this point was sky high and indeed, I took a quiet moment to prepare for an emotional reveal. After all, no matter what was on this reel, it was put there for a reason and that reason alone represented an insight into a part of my father’s life that I knew nothing about until that very moment. I consider myself very lucky to have that opportunity, as those in my position will no doubt understand.

So what was on the reel, I hear you ask? Well, I had given this some thought during the previous few days and thought it might have been a recording of him (or his family) singing or playing the accordion, or perhaps a recording of someone describing some of the video reel footage I’d converted some years earlier.

In the end, it was actually none of the above and instead was a collection of 14 songs recorded from the radio, ranging from 1969 to 1974. There were occasional hints of the voice of Brendan Balfe along the way (a popular RTE Radio presenter at that time), so I’m assuming it was his radio show that was being recorded.

Here is a full catalog of the extracted from the reel, which was derived after several hours of painstaking listening for recognisable lyrics, against a backdrop of electrical noise and melodic crackling. I’ve linked each one to a YouTube video of the original song for you to enjoy also:

Apart from the curious variety in musical styles (and fashion), I was actually rather impressed with the coolness of some of the tracks, especially Jeff Beck and Credence Clearwater Revival. He certainly kept a few of those guilty pleasures quiet for all the years that he instead lauded the dulcet tones of Foster & Allen!

All in all, this was a thoroughly enjoyable, albeit very emotional, few days that, thanks to the help of people I had never even known one week before, is now set to become part of a new chapter in our family memorabilia that I hope will last for another 50 years, and more.

Thanks Dad, and thanks Gary!

While writing my previous post about The Music of What Happens, I noticed RTÃ‰’s new music website – http://www.rte.ie/music – for the first time. I’m not actually sure how long this has een there but I thought it was worthy of a mention. I like the jukebox graphic effect, positioning of links, blend of colours and well thought-out user interface. All flash-based of course!

I first came across the Live Plasma project in early 2006 but rediscovered it again recently. This article on Visual Complexity describes it as:

Liveplasma maps and displays music and movie search results with linkages and groupings, making a good use of Amazon.com’s API. After the search term is submitted, it’s immediately surrounded by other artists; the closer they are, the more similar they are in style to the target. The user can search, map, discover new movies or artists then save and share their maps. 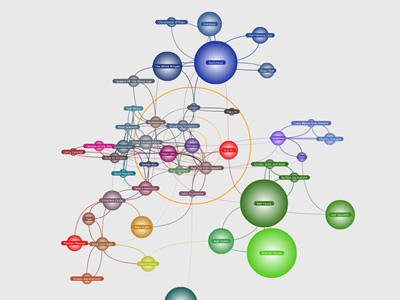 It really is quite a lot of fun to use, and good for discovering similar bands to ones you already listen to. It’s also good for finding movies with your favourite actor that you may not have seen before.

I also noticed on Michele Neylon’s recent article that the Last FM Playground project looks to be doing something along the same lines. I wonder if the are also using the Amazon APIs.

You can say what you want about the Michael Jackson but for my money he was a musical genius and his death is a tragic loss to the world. I’m sure the debate about his many and varied character flaws will live on but not for anywhere near as long as his music will.

It’s a real shame that he didn’t get to perform the series of concerts he had scheduled for The O2 Arena in London. Who knows what other great music he might have written on the back of the renewed confidence he could have gained from them. I had the privilege of seeing him perform in Cork, Ireland in 1988 and to this day, I’ve yet to see anything quite like it.

On a related note, you can look at a collection of his finest work on the excellent MUZU TV.

The Irish national broadcaster RTÃ‰ has launched its own TV Player allowing viewers (in Ireland) to watch programmes up to 21 days after they were broadcast. It is similar in concept to the BBC iPlayer (which was actually launched several years ago now) with the exception that it does not yet support Radio broadcasts. RTÃ‰ have been broadcasting live TV from their website for some time now with limited availability of pre-broadcast programmes but this takes things a great deal further.

At first glance, I think it looks really well, seems pretty easy to use and plays well on my home broadband connection.

Check out this clever music video from Take This Dance. When you play it, it attempts to detect your physical location (based on your Internet connection settings) and then downloads data from the likes of Flickr, YouTube and various other RSS-based Internet sites. Snippets of this information then appear at various stages throughout the music video.

Whilst it seems to work very well from my work office (i.e. my location is accurately detected), when I run it from home, it seems to think I am in Dublin, Ireland when in fact I am 100 miles away in Waterford City. I guess this is down to my Internet provider (BT in this instance).

Still though, it’s a neat idea and is lots of fun all the same!

It’s quite similar in concept to a previous video I saw entitled Crayon Physical Deluxe but you can download a copy of Phun to play with yourself.

If you have a mobile phone that supports audio recording, then it most probably stores the recordings in Adaptive Multi-Rate format (AMR). If you want to convert these to other formats (e.g. MP3) then I found that Mobile Media Converter by MIKSOFT works quite well. It also supports conversion of 3GPP video files to other popular formats including WMV and MPEG.

It’s available for both Windows and Linux but no sign of a version for Mac (yet).

There was brief, non-technical discussion on Internet Marketing on The Last Word programme on Ireland’s Today FM radio yesterday. They do pieces like this from time to time and they’re generally quite informative to the uninitiated listener.

This discussion was targeted at those whose core business is marketing and selling via the Internet and how to understand (and possibly improve) the search ranking being achieved by your website.

The interview starts at around 31 minutes into the Podcast of Thursday’s Last Word radio programme.

Ewan McGregor and Charley Boorman recently completed another motor cycling adventure that took them from the northern-most tip of Scotland, John O’Groats down the the southern-most tip of Africa, Cape Agulhas. The highlights from their journey, the Long Way Down, are being broadcast on BBC Two (six episodes I believe), commencing October 28th 2007.

I am looking forward to this as I really enjoyed watching their first adventure, the Long Way Round (on DVD as it happens) where they circumnavigated the world (London to New York via Asia) using a similar mode of transport.

I also caught the end of an interview with Charley Boorman on Ireland’s Today FM last night, which I think made for great radio listening. You could just feel the passion, excitement and fervour in his voice when describing some of the things they experienced. It’s well worth a listen if you have a few minutes to spare.

His interview starts around 15 minutes (and 30 seconds) into the Podcast of Thursday’s Last Word show.