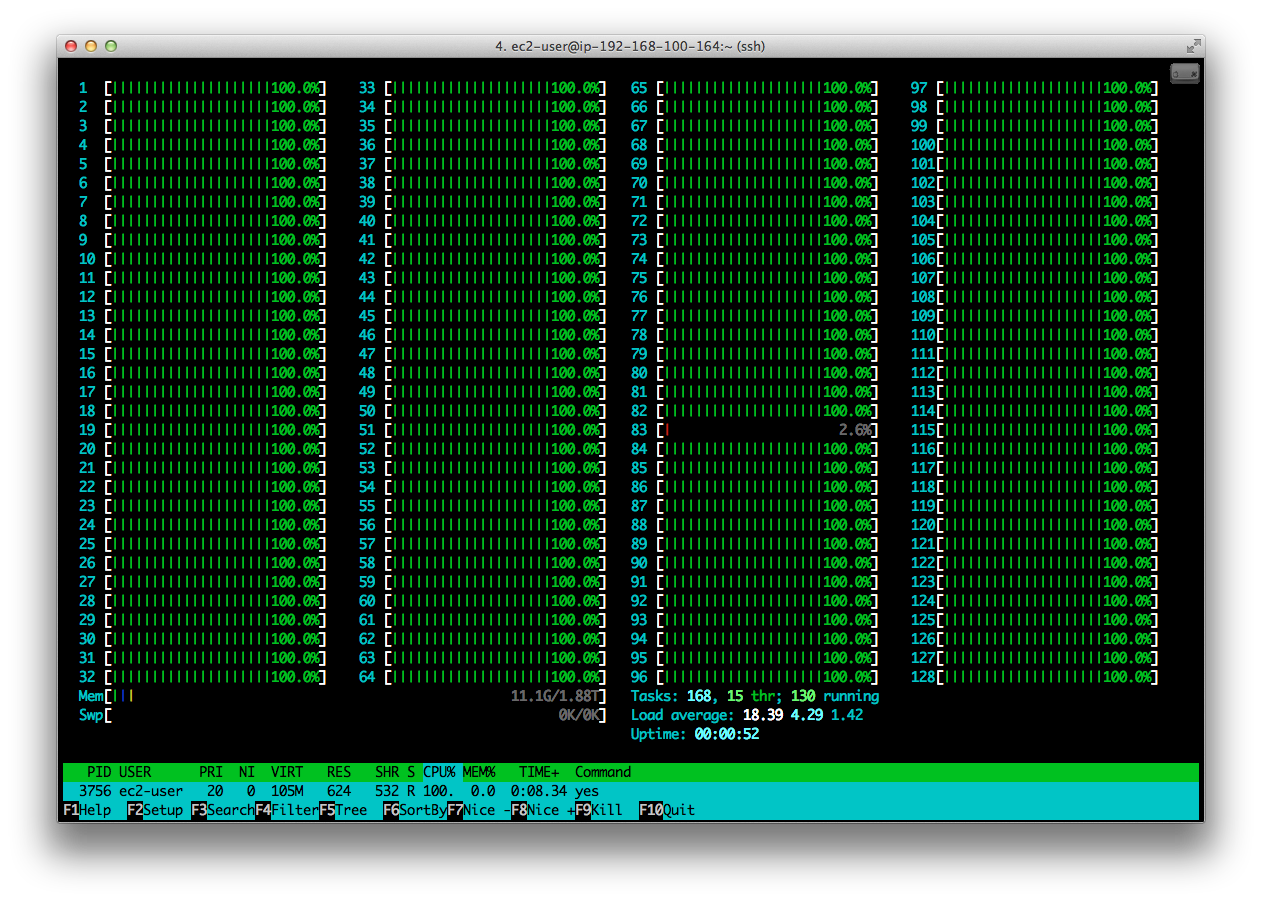 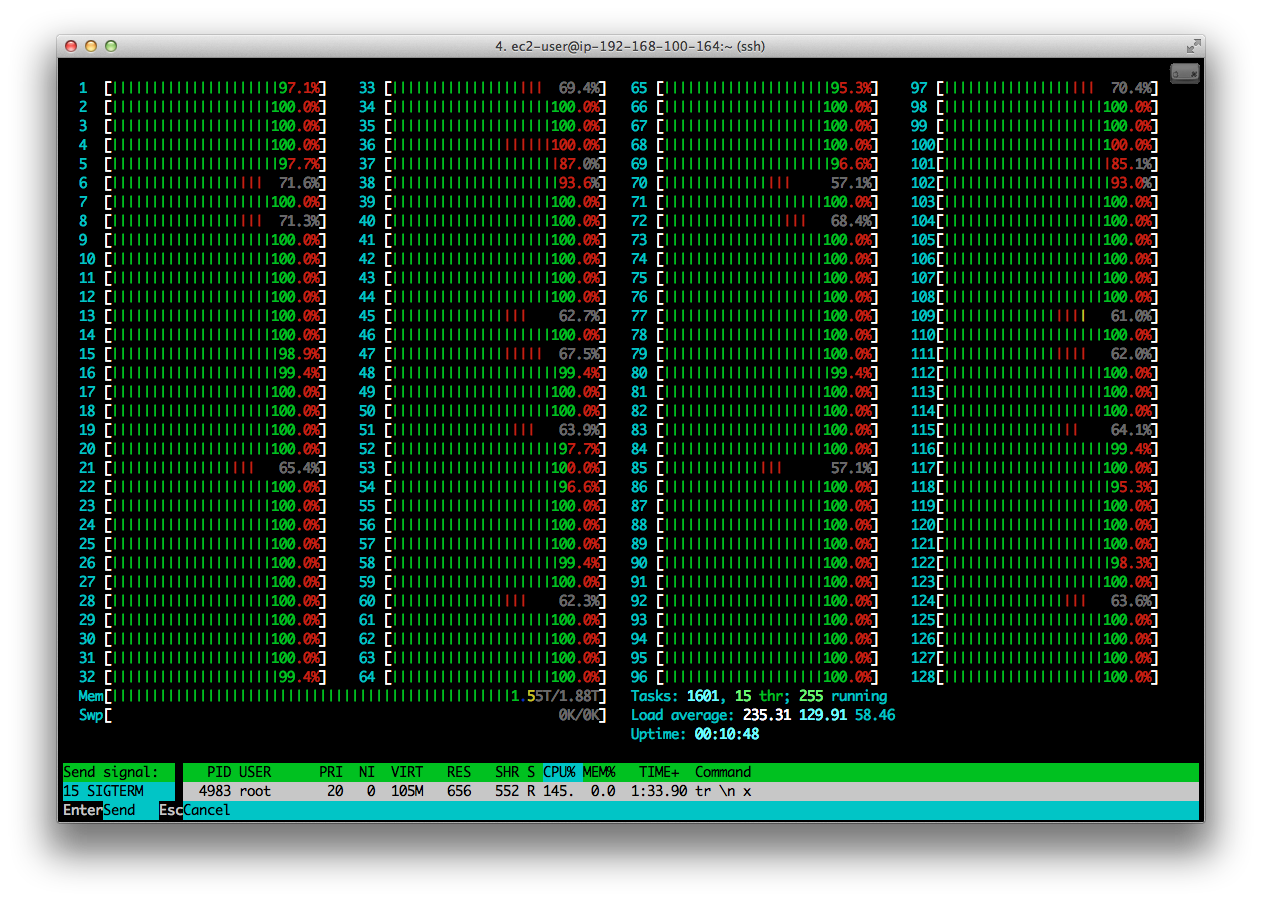 During a recent evaluation of Amazon’s Elastic File System service, we were astounded to discover that it is backed by what can only be described as a gargantuan storage volume, spanning a whopping 9 Exabytes in size.

For those of you familiar with the Unix operating system, here is a screen shot showing the 9 Exabytes in action (note the sheer number of digits in the Available space column).

To put this mammoth of a number into perspective, assume that:

But to get from there to an Exabyte, you’d need eat your way through a further 1,000 Terabytes to get to what’s known as a Petabyte. And it’d take a further 1,000 of those to finally get to an Exabyte. And remembering that our EFS volume is 9 of those, that’s the equivalent of 1,800 billion (or 1.8 trillion) photos!

And fascinatingly, when using the more helpful alternative of the above Unix command (df -h) which shows the used space in percentage terms, you would have to copy an astonishing 90 Petabytes of information (or 18 billion photos) onto this disk volume just to get the Used column to move off 0%.

The main selling points of EFS are that it:

Based on our experiences from previous region launches (e.g. Sydney), where we discovered that not all of the services we use/require are available at the time of launch, we decided to compile a list of those features and put together a set of evaluation criteria for determining if/when we might be able to launch some new services from Mumbai.

And while it may seem excessive or wasteful to formally evaluate if all of the services you use are available (plus, the press release normally contains some information about this), we actually discovered that a number of Instance Types (that we were still using in other regions) we not in fact not being made available in Mumbai at all.

The items below are what we discovered were not as we expected (in the Mumbai region) but the list could, of course, be different for you or for the next region launch.  So there is still value in compiling a list of the services your organisation uses/requires also.

Not all instances types were available.

At the time of Mumbai launch this was also not yet available in the Sydney region either.

It was actually when first evaluating the Frankfurt region (eu-central-1) that we discovered that AWS would not be supporting V1 of their APIs there (so we had to update some of our tooling). It was the same in Mumbai.

The Mumbai region only had two Availability Zones at initial launch and this was insufficient for a Disaster Recovery (DR) deployment of MongoDB. This is because MongoDB requires a minimum of 3 members to form a valid Replica Set. And while you can still form a 3-member Replica Set using two AZs, you could lose access to two of those in the event of an AZ failure.

None of these issues were insurmountable for us but learning about these differences ahead of time did enable us to adjust our delivery timelines and manage customer expectations accordingly (e.g. to allow extra time for new AMI generation), which is a very valuable part of any planning process.

On foot of the recent launch of the AWS Certificate Manager service, we decided to check it out. Here are some of our highlights along with some noteworthy items you may find helpful.

This command will generate a wildcard certificate in you default region using your default AWS profile (i.e. account):

This command shows how to specify the region and profile to be used for the new certificate: